Seminar in Oud Beijerland (The Netherlands)
575
post-template-default,single,single-post,postid-575,single-format-standard,stockholm-core-1.2.1,tribe-no-js,select-theme-ver-5.2.1,ajax_fade,page_not_loaded,vertical_menu_enabled,paspartu_enabled,menu-animation-line-through,side_area_uncovered,wpb-js-composer js-comp-ver-6.1,vc_responsive
March 6, 2010 In Uncategorized By Kathrin

Seminar in Oud Beijerland (The Netherlands)

Invited by Sensei Hans Roos, Shihan Jhonny Bernaschewice went to Oud Beijerland (The Netherlands) from 6 to 7 February 2010 in order to teach at the “International Seminar” held there.  Four major martial arts styles were scheduled for those 2 days promising an intensive training – Chi Ryu Aiki-Jitsu, Okinawa Kobudo as well as Iaido and Ken-Jitsu. Shihan Bernaschewice was impressed by the dedication shown. After the seminar Shihan Bernaschewice was presented with a book about the Development of Judo in the Netherlands. 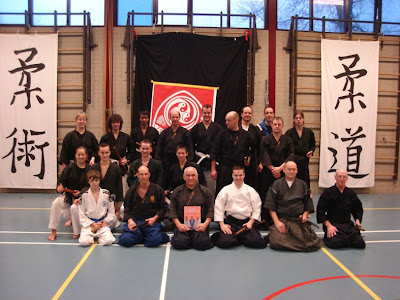